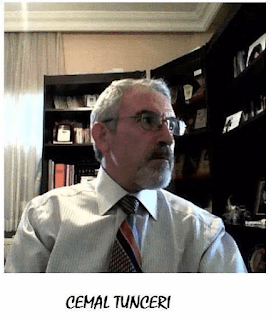 Cemal Tunceri was born in 1952 in Yesilyurt Village of Cyprus. He is a Mechanical Engineer by profession and served both as an expert and as a senior administrator for many years in public enterprises. He started drawing cartoons in 1982 and he is one of the founders of the Cyprus Turkish Cartoonists Association. His cartoons have been published in a number of prominent daily newspapers and journals some of which are Kibris Postasi, Oram, Bozkurt, Halkın Sesi, Akrep, Lololo, Kıbrıs Çağses, Yelpaze Dergisi (Journal), Yenidüzen, Havadis, Realist, Yurtsever Kıbrıslı, Cyprus Diyalog, Yenidüzen Sanat, and Adres Kıbrıs Dergisi (Journal). For some time his cartoons were published with a code name “T. Umut”. For some time he published a daily cartoon story named as “Mission” (Gorev) at the Kibris Postasi Newspaper and for a long period of time, his cartoons were published weekly in a column named as “At the End of the Speech” (Sozun Bittigi Yerde) at the Yeniduzen Art Newspaper. Currently, he is drawing cartoons at the Adres Kıbrıs Journal. Mr. Tunceri participated in a number of International Cartoons Competitions in various countries and his cartoons were selected and published in International Albums. Some of these countries were Cyprus, Canada, Turkey, Italy, Bulgaria, Belgium, Japan, Macedonia, the United Kingdom, Portugal, Kosovo, and South Korea. Two of his cartoons were accepted and published in Café Hawelka Art Album in Vienna. His 4 cartoons were used as cover pages in various books. One of his cartoons was printed on the International Women Rights Exhibition poster in two languages, the exhibition being organized by Karcomiks on 13 March 2014. He prepared logos of a number of art establishments (associations). His cartoons were presented in exhibitions at various times. His first exhibition was held in 1992 at the Famagusta Municipality Hall and this was followed by the exhibitions in 1995 at the Near East University in Nicosia, and in 2004 at the Eastern Mediterranean University in Famagusta. He collected his cartoons in two albums named “Isirgan Otu” and “Guldusen” which were published in 1996 and 2006 respectively. Cemal Tunceriis a member of the European Cartoonists Federation (FECO) and took place as a jury member in a number of international competitions. In 2015, he was awarded the title of “Goodwill Ambassador of North Cyprus” by the International Good Humour Party. Cemal Tunceri is married and has a son. 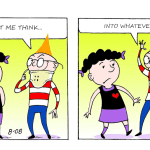