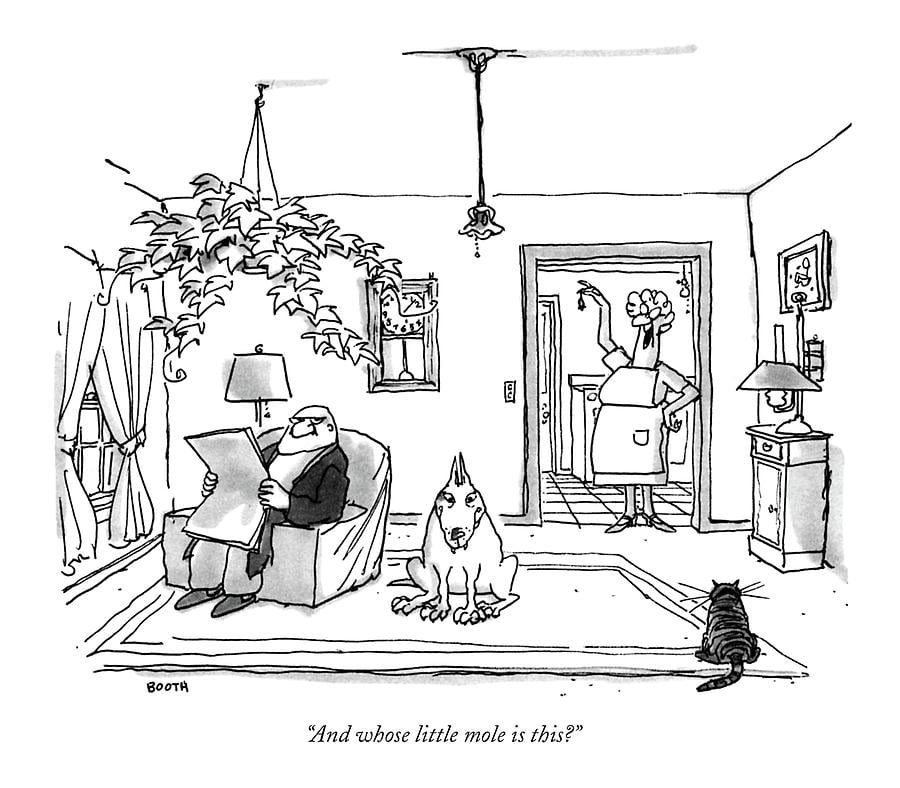 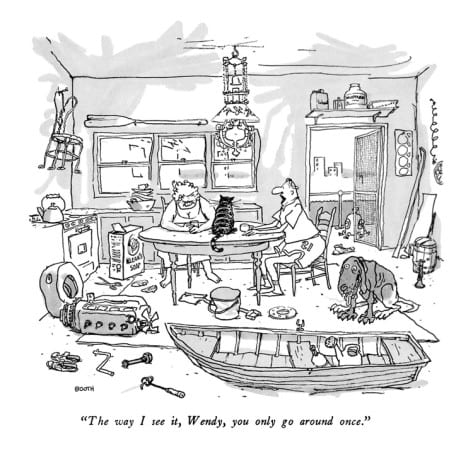 George Booth, a celebrated cartoonist whose whimsical and irreverent works have appeared in the New Yorker since 1969, has illustrated several critical acclaimed picture books for young readers, including Candace Fleming’s Who Invited You? and Jean Conder Soule’s Never Tease a Weasel. George Booth’s “signature images, delineated with extraordinary graphic flair, are recognized around the globe,” noted Carol Strickland in the New York Times.

Born in Cainsville, Missouri, in 1928, George Booth began cartooning for the Leatherneck while serving with the U.S. Marines. After working as an art director in New York, he sold his first cartoon to the New Yorker at the age of forty-three, and he has been a regular contributor ever since. “George Booth has a great eye for the bizarre but telling detail,” art editor Lee Lorenz told Strickland. “I guess I just enjoy insanity,” the cartoonist remarked.

In 1974 George Booth provided the artwork for his first children’s book, Wacky Wednesday by Theo. Lessig (better known as Dr. Seuss). He later collaborated with Nancy Van Laan on a pair of works, Possum Come a-Knockin’ and Nit-Pickin’. In the former, a wily, top-hatted possum plays a series of pranks on the unwitting members of an eccentric household. “The characters that populate Booth’s cartoon-like illustrations have a goofy charm,” a contributor remarked in Publishers Weekly. Nit-Pickin’, a work told in verse, concerns an infestation of head lice.

George Booth teamed with April Halprin on It’s Not My Turn to Look for Grandma!, which centers on a scrappy hillbilly family. When her four children fail to convince Grandma that there is important work to be done around the house, she coaxes her relatives out of seclusion with a special banjo tune. In the words of Virginia E. Jeschelnig, writing in School Library Journal, the narrative’s “mountain twang is well paired with wild cartoon illustrations that highlight its sassy tone.”

In The Ballymara Flood, a picture book by Chad Stuart, a young boy overflows his bathtub and proceeds to flood his small Irish town, creating a panic that forces the mayor to call on the navy for assistance. Stuart and Booth “fill the town with wacky and inept bureaucrats who enact one slapstick scene after another,” noted a reviewer in Publishers Weekly. “Booth’s pen-and-ink and watercolor cartoons, reminiscent of some of James Stevenson’s work, are the perfect foil for this humorous tale,” remarked Marianne Saccardi in School Library Journal.

Set in a bayou swamp, Fleming’s Who Invited You? a counting book focuses on a young girl and her boatful of annoying and unwelcome animals, which includes a muskrat, heron, and frog. Booth’s illustrations feature “a cast of critters with the inimitable wide-eyed, seemingly electrocuted look that fans of his New Yorker cartoons will immediately recognize,” noted a Publishers Weekly contributor, and Linda Ludke, writing in School Library Journal, stated that his “animated ink-and-watercolor illustrations match the frenzied rhymes of the text.”

First published in 1964, Never Tease a Weaselwas reissued in 2007 with new artwork by Booth. Soule’s rhyming text presents a variety of ways to live in harmony with mules, skunks, and other creatures. Booth’s pictures “combine the sophistication of line with a real zaniness of spirit,” observed Carolyn Phelan in Booklist, and School Library Journal reviewer Marilyn Taniguchi remarked that his “drawings with bright daubs of color perfectly capture the lighthearted goings-on.” 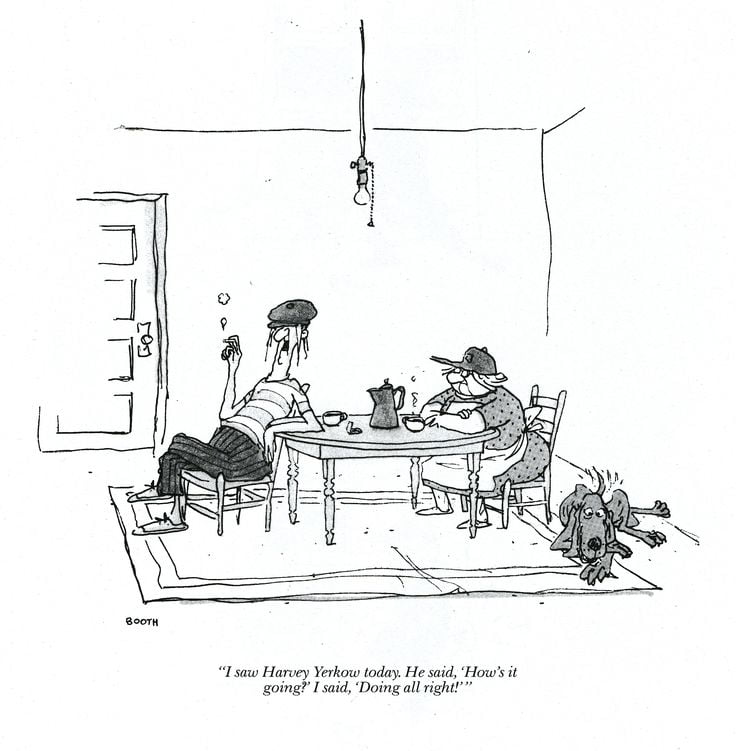 New York Times, February 7, 1993, Carol Strickland, “Flights of Lunacy on the Drawing Board.”

Yale Daily News, March 4, 2005, Emily Coates, “The New Kids at the New Yorker: How The New Generation of Cartoonists Is Remaking the Magazine.”